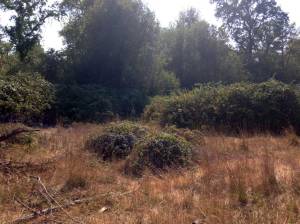 Letters were recently sent to three local tribes in Mendocino County notifying them of a need to use herbicides to remove non-native invasive Himalayan blackberry plants from Willits Bypass mitigation parcels.  Caltrans had anticipated using manual methods to eradicate 32 targeted invasive plants growing on mitigation parcels.   Included in those targeted plants is Himalayan blackberry, but the accelerated time schedule negotiated with the US Army Corps of Engineers (Corps) as part of the reinstatement of a permit no longer makes this possible.  It would require a minimum of 5 to 7 years to eradicate the invasive Himalayan blackberry growing on 67 acres using manual methods, but Caltrans does not have that long to complete the establishment of native plants to meet our commitments to the Corps. The use of herbicides will likely take place over three years in the late summer or fall when no water is present around the plants, each year decreasing in use as fewer of the plants re-sprout. 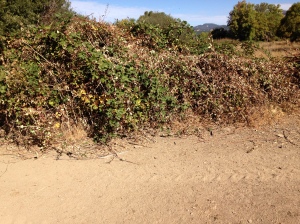 Caltrans is committed to reducing herbicide use.  For example, in Mendocino County, herbicides are now rarely used, and then only after notifying local agencies, addressing their concerns, and then notifying the public through an herbicide hotline (707-441-5834 or 800-999-1053).  The hotline covers all of District 1: Del Norte, Humboldt, Lake, and Mendocino Counties.

RE: Use of herbicides in specific locations on the Willits Bypass mitigation parcels

Caltrans is aware that Tribes are concerned with the use of herbicides, as is Caltrans. For that reason, Caltrans has been thoughtful in our consideration of the use of herbicides on the invasive Himalayan blackberry plants located on the Willits Bypass mitigation parcels. This letter will inform you of the reasoning behind Caltrans’ decision to use herbicides, discuss where and how herbicides will be used, and explain the precautions that will be implemented during its use.

Success of the Caltrans’ Willits Bypass Mitigation Project includes creating wetlands and enhancing existing wetlands. To that end, cattle grazing on the parcels will be limited, wetland plants will be propagated, and 32 target invasive plants identified in the June 2014 Habitat Mitigation and Monitoring Proposal (HMMP) are proposed to be controlled by a variety of techniques. According to the HMMP, invasive plants will be controlled using the most appropriate means as dictated by the species of concern. Caltrans will utilize the most appropriate current knowledge and management practices regarding the species and take into account any location constraints. We believe most of the plant species can be controlled with manual means.

Alternatives to herbicide use considered
The June 2014 HMMP proposes standard and accepted techniques for removing target invasive plants from the mitigation parcels including manual removal, mowing, tillage, grazing, burning, flooding/draining, mulching, solarization, biological controls, competition from native species, and/or the use of herbicides.

The use of fire to control Himalayan blackberry was considered, however, due to drought conditions, and because fire would treat only the portion of the plant above ground leaving behind extensive root systems to grow again, that method was dropped from consideration.

Removing invasive Himalayan blackberry by grazing or by manually digging, mowing or tilling was also considered. As is true with the use of fire, grazing, mowing, digging and/or tilling removes only the topmost portion of the blackberry plant leaving the extensive root system to grow again. In fact, removing the above ground portion of the blackberry plant would likely result in stimulating the plants growth the next growing season. Additionally, digging or tilling would result in a high degree of ground disturbance that is an activity that we are attempting to minimize due to the sensitivity of the Little Lake Valley for archaeological resources.

Due to the aggressive nature of Himalayan blackberry, it was determined that even with the use fire, grazing, digging, mowing, and/or tilling, the removal of the plant to a point of controlling it would require, at a minimum, five to seven years. Additionally, there is a real chance that the blackberry plants would never be effectively controlled using these methods; a scenario that would impact Caltrans’ ability to begin restoring native plants (riparian establishment) to Little Lake Valley in compliance with the June 2014 HMMP.

The decision to use an herbicide
Himalayan blackberry, which occupies approximately 67 acres of the mitigation lands, is an aggressive, non-native plant that spreads vegetatively and forms large impenetrable stands. Based on recent conversations with weed control and restoration experts, Caltrans has determined that, due to its large underground root system, its aggressive and tenacious growth pattern, its invasion of the substantial acreage on the mitigation lands, and the delay to the planting schedule non-eradication would cause, there is a compelling reason to use herbicides to control Himalayan blackberry. Caltrans submitted a conceptual Herbicide Use Plan to the Water Board in September 2014 and obtained approval to proceed with limited herbicide use with the understanding that the application would be manual (no aerial spraying) and that no application would take place when surface water is present or precipitation is forecasted.

Herbicide application methods
According to the September 2014 Herbicide Use Plan, the application of herbicide will be limited to hand methods, such as the use of a wand (chemical wiping) or painting. Caltrans proposes to cut back the blackberries and then apply the herbicides on the re-sprouts. The use of aerial or broadcast spraying is prohibited and the herbicide must be safe (i.e. approved) for aquatic sites. The mix and application rates will comply with the requirements of the California Department of Pesticide Regulation (CDPR) and the instructions on the herbicide product label. Upon award of the Mitigation Project’s contracts governing the eradication of the target invasive plant species, including Himalayan blackberry, the contractor will prepare a “weed management plan” addressing all weed control activities on the project including the locations of herbicide use and the amount of the product that will be used. The plan will incorporate specific contact information for the applicator(s) (personnel), application method, and measures to prevent herbicide spills.

Schedule for herbicide application
According to the September 2014 Herbicide Use Plan, treatment is proposed for late summer and fall when water is not present. As mentioned above, herbicide application will not be allowed when surface water is present. The contractor’s “weed management plan” will address all weed control activities on the project, including the eradication of the Himalayan blackberry. The plan will incorporate specific information concerning the general time period and location of expected herbicide use.

Duration of herbicide use
According to the September 2014 Herbicide Use Plan, the expectation is to treat re-sprouts of the entire blackberry occurrence acreage the first year, with decreasing treatment needs and decreasing treatment acreage each year over a 3-year plant establishment period. Plantings on the mitigation parcels within the rehabilitation and establishment areas will be delayed until the Himalayan blackberry can be controlled.

Removing the invasive Himalayan blackberry will allow Caltrans to satisfy the conditions of the HMMP by replanting flora native to Little Lake Valley and restoring and creating wetlands in compliance with the mitigation implementation schedule outlined in the June 2014 HMMP. Using herbicides to control Himalaya blackberry will facilitate that effort.

If you would like to discuss this letter further or schedule a meeting to discuss it in person, please contact me at [John’s email] or [John’s phone number].

For Construction Updates sent via text to your cell phone: